The U.S. Treasury Department on Monday imposed fresh sanctions on a close ally of Russian President Vladimir Putin and six employees of a notorious propaganda agency, who have all been accused of using social media to try and influence the 2018 U.S. midterm elections.

The sanctions come as U.S. officials remain deeply concerned about how Russia might try to spread disinformation online to try and disrupt the 2020 U.S. presidential election, which it allegedly did in 2016 and again in 2018.

The chief target of the U.S. sanctions is Yevgeniy Prigozhin, who the U.S. alleges provided financing for the Internet Research Agency. Based in St. Petersburg, the IRA employs people to create bogus social media accounts and seed divisive content aimed at sowing distrust in the U.S. political process. In short, it's accused of being a troll farm.

The U.S. placed new sanctions on Prigozhin, including against St. Vitamin, a yacht the U.S. alleges is controlled by one of his front companies.

The sanctions announced by the Treasury Department forbid U.S. citizens from transacting with designated individuals or their property, including Prigozhin’s yacht, named St. Vitamin, as well as his three private aircraft. Prigozhin, a restaurateur and businessman, had already been placed under U.S. sanctions.

New sanctions have also been imposed on six alleged members of the IRA; three had already been sanctioned.

Prigozhin and four of the six IRA members named in the latest sanctions were previously indicted by a grand jury in Washington federal court in February 2018. All were charged with conspiracy to defraud the United States.

Despite extensive public research into and awareness of the IRA before and after the 2016 elections, its alleged activity continued. The Treasury Department says in the lead up to the November 2018 midterm elections, the IRA “conducted a variety of activities that were part of a broad campaign to try and influence the U.S. political system.”

Seventeen U.S. intelligence agencies concluded that Putin personally ordered the online campaign to disrupt the 2016 presidential election. That conclusion came in part from a Russian spy with access to Putin who the CIA recruited decades ago, The New York Times reported.

Such intelligence was gleaned despite Putin being a difficult target to spy on, not least because he eschews mobile phones and computers, Time reports.

U.S. intelligence agencies concluded that Russia’s 2016 election disruption efforts didn’t affect the voting process or vote tallies. But they contended that the campaign was designed to boost Republican candidate Donald Trump at the expense of Democratic candidate Hillary Clinton. Russia also targeted election systems and infrastructure in all 50 states, apparently probing for weaknesses and potentially laying the groundwork for future disruption (see: Russia Targeted All 50 States During 2016 Election: Report).

The bogus social media accounts created by the IRA were used to try to create and amplify divisions over already contentious U.S. issues, such as gun control, immigration and migration. Later research showed the online campaigns that seeded disinformation or divisive views had a wide reach. But determining how much U.S. voters might have been influenced by such campaigns remains difficult.

Despite the IRA's activity being exposed, the company didn’t stay under the radar. In fact, it doubled down, creating a website around November 2018 that flaunted its continued efforts to create fake accounts and boasting of its ability to influence political discourse, U.S. officials say. 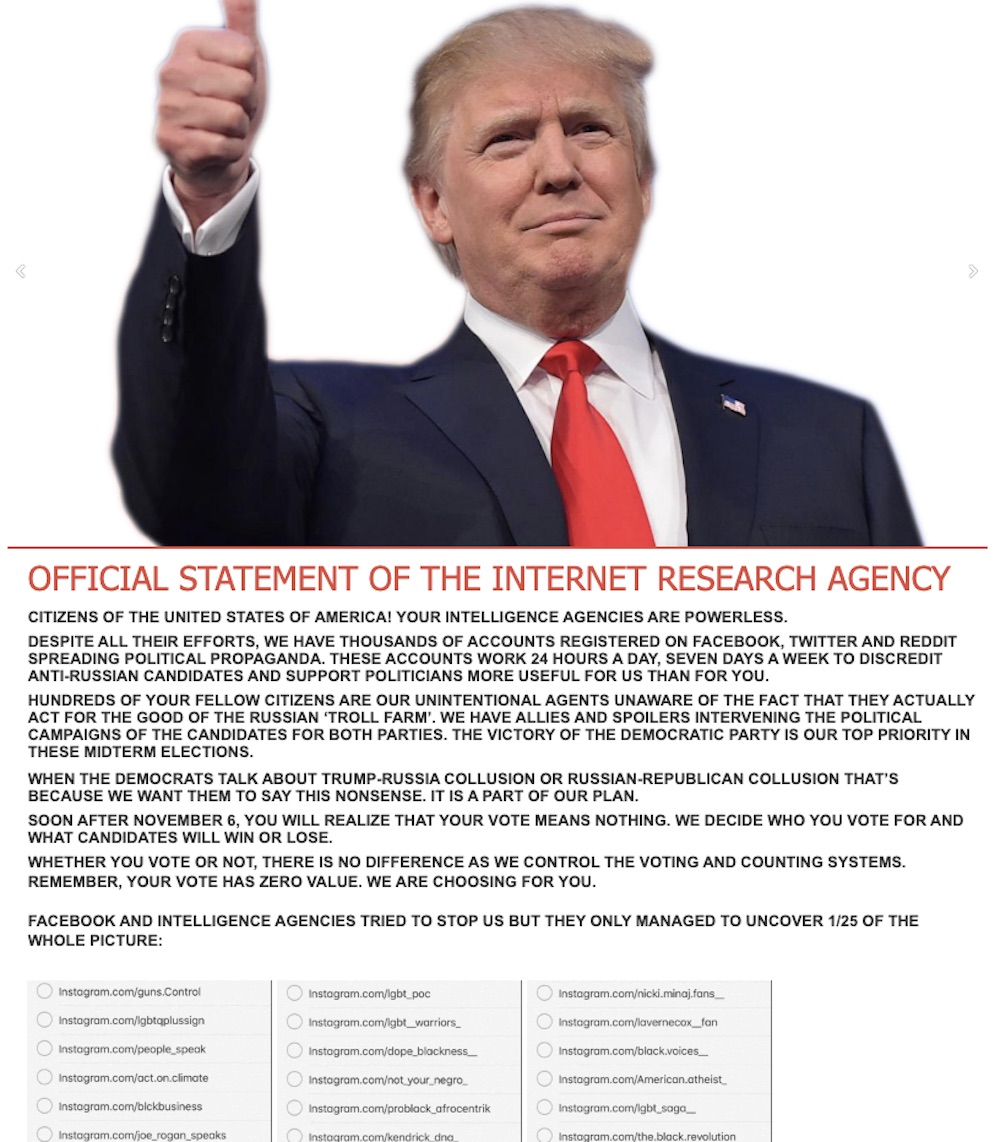 The IRA flaunted its efforts to run misleading social media campaigns by creating a new website in November 2018, the U.S. Treasury Department says.

The Treasury Department says the IRA in October 2018 released a staged video filmed by an IRA employee that claimed they were seeking to influence and interfere in the 2018 U.S. midterm elections.

Russian disinformation efforts have frequently been accompanied by elaborate ploys to draw attention. Western intelligence agencies, for example, say that Russia’s GRU intelligence agency runs the hacking group known as Fancy Bear, aka APT28. The group has been blamed for hacking the Democratic National Committee and the World Anti-Doping Agency, among many others. Follow-on data leaking campaigns involved the use of mysterious actors and cutouts, such as Guccifer 2.0, who contacted journalists and created websites that promoted stolen data. But intelligence agencies say these were all part of the Russian operation.

In response, U.S intelligence agency hackers shut down internet access to the IRA a few hours before the 2018 midterm elections and for a few days afterward, the Washington Post has reported.

Three years after the last presidential election, social media companies such as Google, Facebook and Twitter have undertaken efforts to cull bogus accounts and reduce the amount of misinformation in circulation.

More broadly, misinformation continues to pose massive challenges, particularly in an era in which facts appear to be more malleable than ever, and in which the impression created by falsehoods can linger, even after if later corrected. News organizations in particular are grappling with how to cover information relayed by public officials that is provably false and weighing whether it’s irresponsible to repeat false claims that come from official sources.

Such difficulties and conflicts will not evaporate before the 2020 U.S. presidential election, and officials are bracing for even more interference attempts, and not just those sanctioned by Moscow. In July, Special Counsel Robert Mueller warned the House Intelligence Committee that other countries are seeking to replicate Russia’s actions.

Meanwhile, Russia's 2016 interference wasn’t a single attempt, and it continues, with Mueller telling lawmakers in July: “They’re doing it as we sit here.”