What Steps Should Entities Take to Battle Back? Marianne Kolbasuk McGee (HealthInfoSec) • October 17, 2019

Data breaches involving phishing and other email-related compromises persist as a top challenge for healthcare providers. So, what are some of the top trends emerging from these incidents?

Phishing attacks are the primary vector in many of the largest health data breaches being reported to the Department of Health and Human Services these days, said Roger Severino, director of HHS' Office for Civil Rights during the 11th annual HIPAA conference this week in Washington, D.C., which was co-sponsored by OCR and the National Institute of Standards and Technology.

In fact, the number of major health data breaches involving email being reported to HHS is climbing, according to OCR.

And it's not just random phishing attacks. Many of these assaults are becoming more sophisticated. "We're seeing more targeted attacks," Severino says. 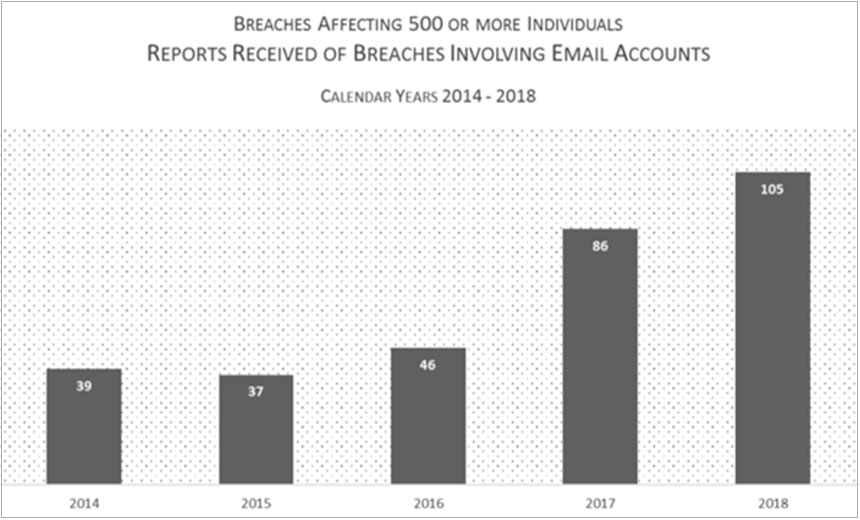 As of Thursday, OCR's HIPAA Breach Reporting Tool website shows that so far in 2019, some 164 incidents have been reported as "email" breaches, impacting a total of nearly 2.7 million individuals.

However, the HHS website numbers don't necessarily reflect all the many other "hacking/IT incidents" that involved phishing but were officially reported to HHS as impacting "network severs" or other IT as the "location" of the breached protected health information - rather than "email."

If all those email related breaches were added to together, the numbers surely would be even more troubling.

So far this year, the largest "email" breach was reported as a hacking/IT incident in February by UConn Health. The Connecticut-based health system said that the breach impacted 326,000 individuals and involved a phishing attack on "a limited number of employee email accounts containing patient information."

Those two phishing incidents impacted more than 230,000 individuals in total, according to the HHS website.

Meanwhile, a recent research report by cybersecurity vendor Proofpoint examining the top cyber threats facing the healthcare so far in 2019 shed more light into some of the specific email challenges faced by the sector.

So, what are some of the top recommendations to protect against these email threats?

It includes a mix of technology and workforce training, the Proofpoint study notes.

That means training users to spot and report suspicious malicious email; implementing technology that spot and block email threats targeting employees before the email hits their inboxes; and using technology that analyzes internal and external email to spot compromised accounts.

What steps is your organization taking to prevent becoming the next entity reporting a major health data breach to OCR involving an email-related compromise?